In this article I go over a Blog Starter Template built on Blazor using the Contentful Headless Content Management System.

The Blazor.Contentful.Blog.Starter Blog Template repository was created to make it easier to get up and running with Contentful built on top of ASP.NET Core Blazor. This template has a bunch of features that will be outlined below, you can see an Live Demo or follow the Deploy this site to Azure instructions to deploy your own example.

The main motivation for creating this template was so I could have an easy way to create new sites built using a CMS, and I found a very well done example template. But the template was built using ReactJS and I wanted to have an easier time extending the functionality for my personal projects, so I took that template as a blueprint and create it using Blazor. I found doing the conversion to Blazor a learning process, in that Blazor does not have a very well established way to handle Server Rendered head tags and how a Azure Resource Manager template can be used to spin up personal resources spaces for new projects.

Integration with the Contentful Headless CMS

As already stated the templates integrates with Contentful, which is a Headless Content Management System, giving the template a backing systems for all the content of the Blog. By using Contentful you can write your blog posts in the Contentful system and with the built in hooks of the Template automatically trigger updates to your deployed site. The template includes the plumbing and does all the heavy lifting with the SDK behind a service layer, making it easier to focus on expanding the site while still having access to the data of your Contentful space.

Out of the Box Theme

With the default starter you get a fully responsive theme using CSS, with customization available through the use of CSS Variables. Using the CSS variables you are able to easily change the color scheme of the whole site and with a little it of customization you could even create a light/dark theme toggle. 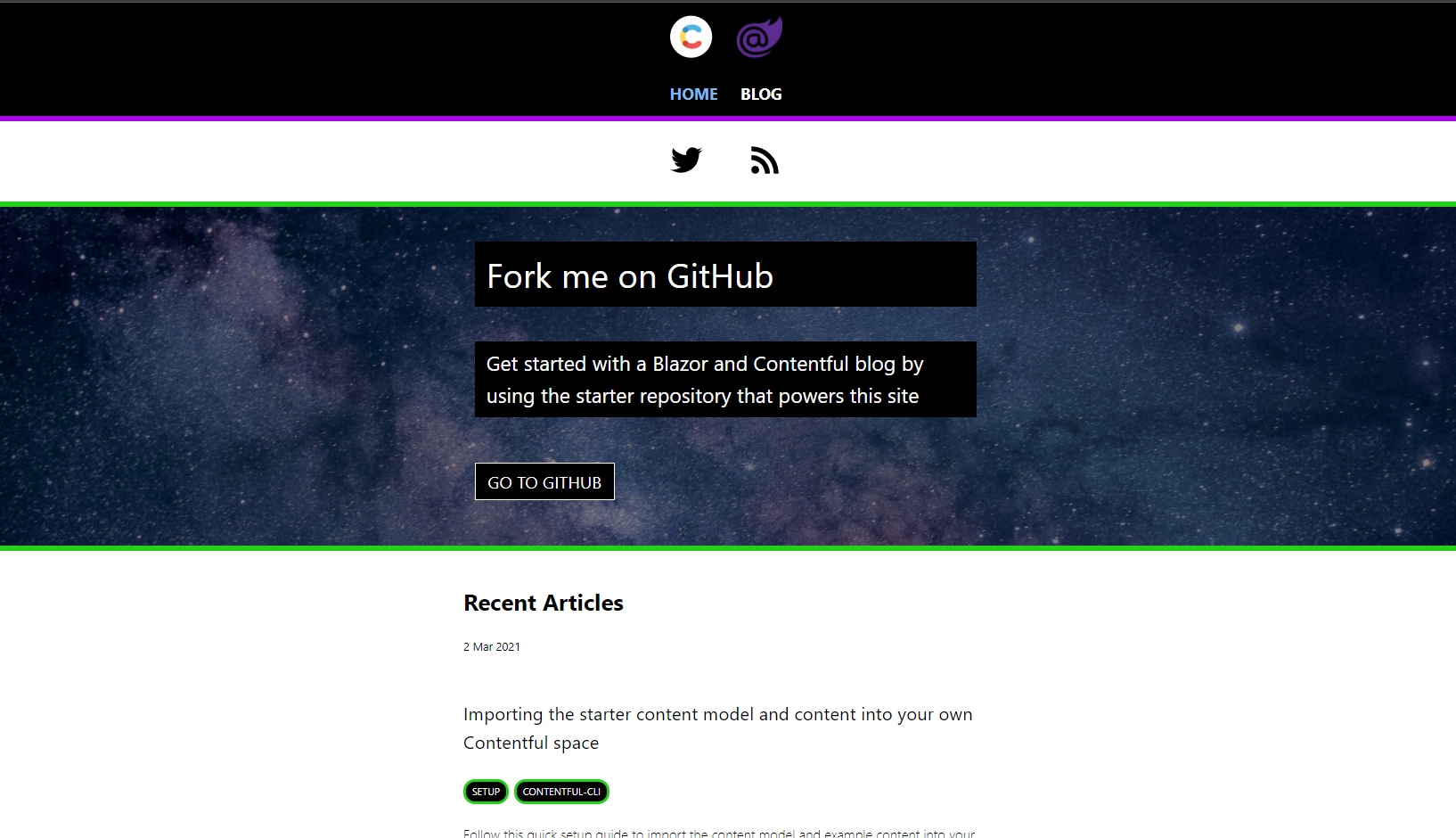 With the template there was a cool feature of dynamic Open Graph images added, the theme uses a publicly exposed Open Graph image generator. This uses Vercel to create an image based on URL Query parameters that can then be used by services like Twitter for Tweet cards.

If you are going to use this site in any compactly please spin up your own Open Graph generator, you can get the source from the Blazor OG Image Repository. 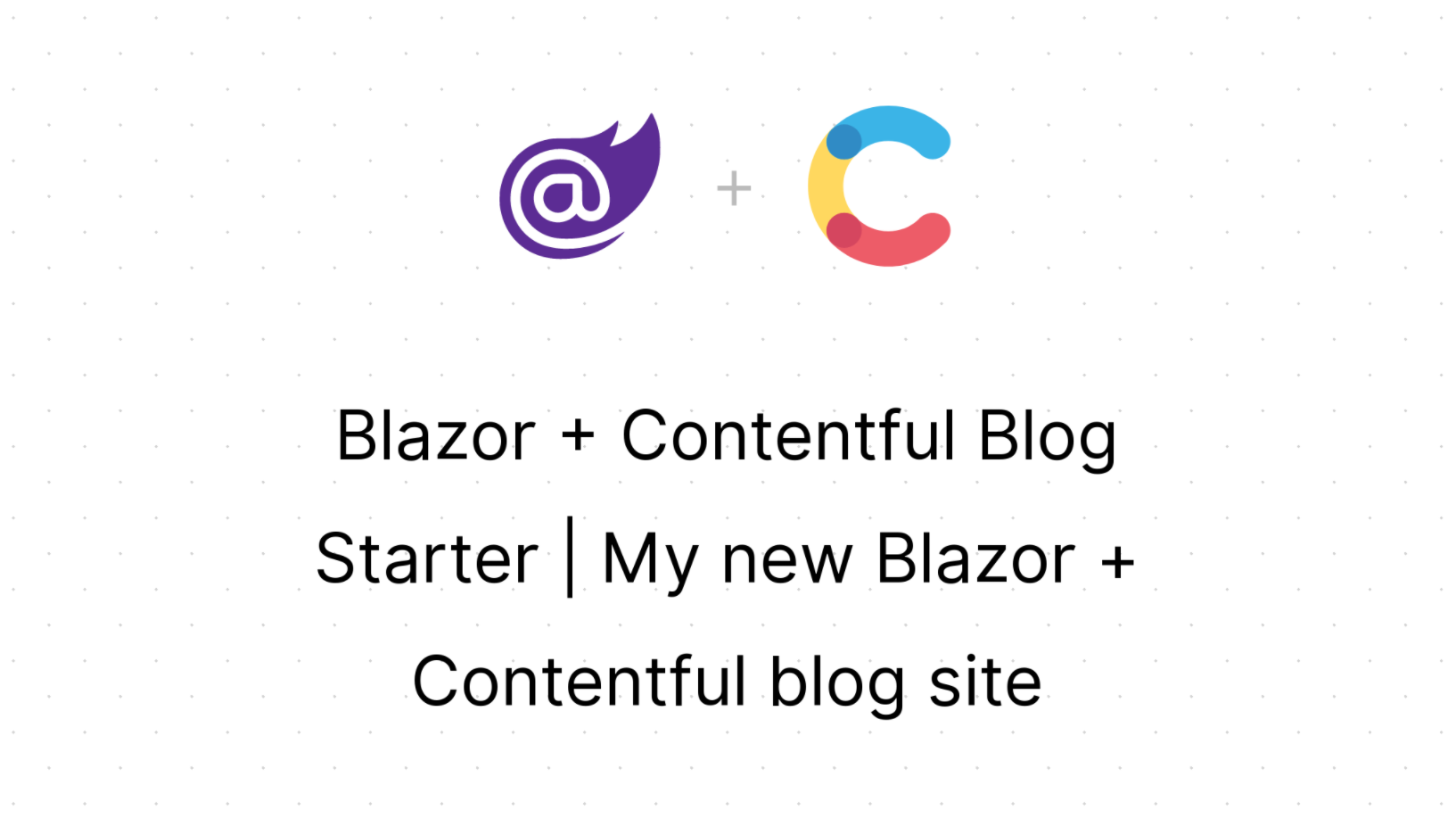 One of the biggest feature, that most Blazor application might be lacking, is the ability to generate SEO related meta tags on Server render. This makes it so you can post any of the URLs from this deployed site to any service that support Open Graph tags and get the correct metadata about the site. The built in system will also update the tags as a user navigates around the application after the first request.

Another feature of the template is Localization is enabled by default for the site, a localization toggle is not currently implemented, but support should be very easy to implement using already existing pattern for Blazor. The pages the have values requiring localization are already in the default resource file, and a base component is created that will help with the inject of the Localizer, that can then be used by extension points.

The template includes an RSS feed generator, that will include the core pages and the published blog posts. The feed URL is also included in the head of the site making it easy for existing tools to pickup and consume. 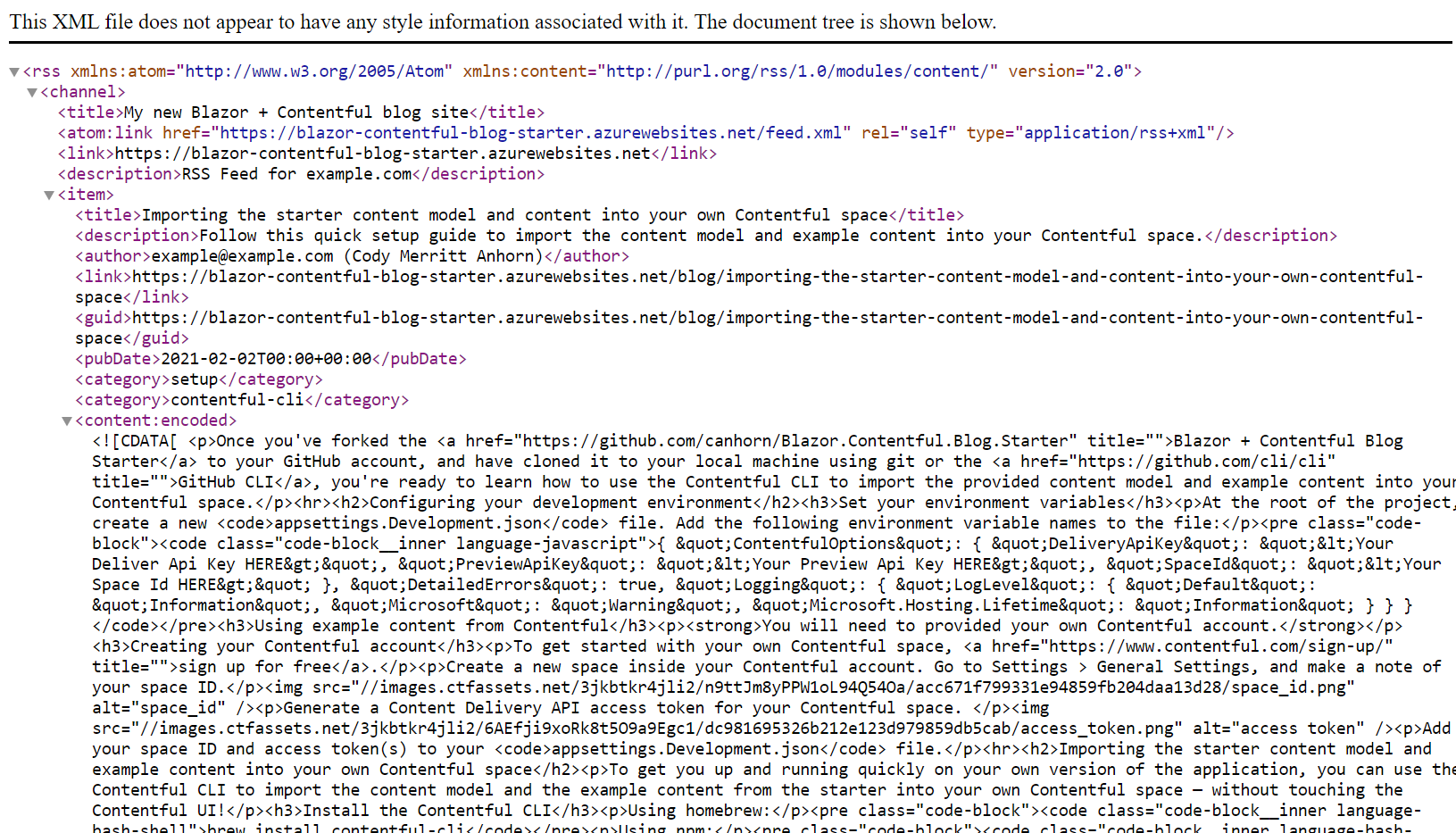 The template also include a Site Map generator, that will include the core pages and published blog posts. The SiteMap is fully compliant for used with Google and Bing web master tools. 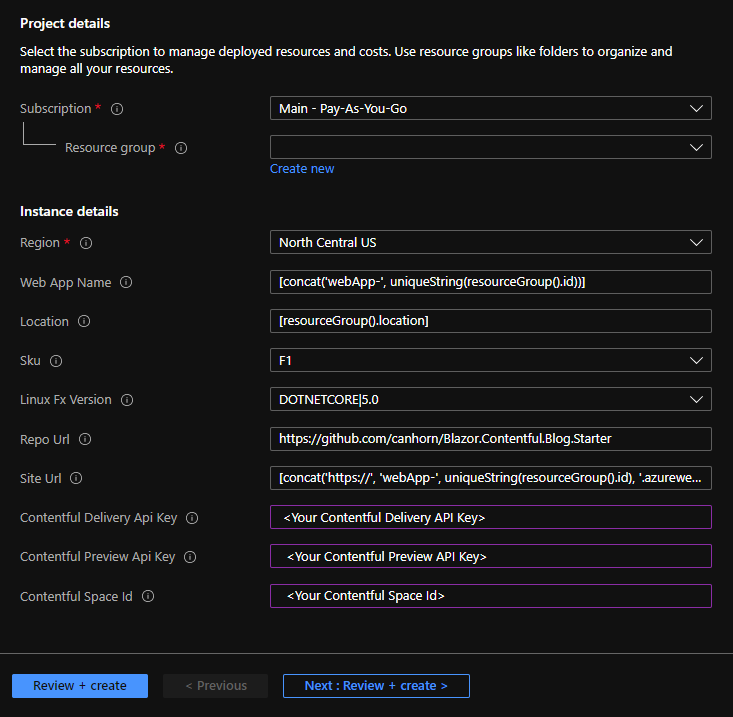 One of the bigger features is cache busting which is built into this template. When you register the WebHook /webhook/cache-buster with Contentful, you will get automatic updates triggered as they happen right to your deployed site. This makes it easy to curate your content in Contentful, schedule it for publish at a later date, and only have to worry about Contentful for all the management of the post.